Scene(s) of the Crime

Walter Benjamin memorably observed that Eugène Atget photographed Paris like the scene of a crime.* Atget’s subject-matter was the Paris of the Third Republic, which built much of the city that tourists admire today. But as Benjamin knew, the Third Republic rose from the ashes of a short-lived workers’ utopia, and by continuing the modernization projects of the reactionary Second Empire, the Republic inscribed lasting changes on the French capital’s spatial order and demographics. Atget, nostalgic at heart, trained his lens on a disappearing world: small shops, humble dwellings and narrow medieval streets, the traditional haunts of Paris’ popular classes. In Atget’s photos, these cityscapes are completely deserted, as if the residents had vanished into thin air.

Perhaps all urban photographers are fated to document flux and transformation, even when, like Atget, their artistic mission is to remember and preserve. This irony is especially sharp in the case of Vancouver, where globalization and property speculators have recently upedended the city. A frenzy of home demolitions and large-scale construction projects has created an urban landscape of staggering inequalities: on the one hand, a rentier class of ultra-rich migrants, money-launderers, and property developers, as well as residents and petty landlords who reap unearned income from their spiking real estate values; and on the other, a downwardly-mobile working population displaced, evicted, heavily endebted, and generally downsized by runaway speculation. In such a context any photograph soon turns historical artifact.

A recent exhibition in Vancouver encapsulates these glaring contradictions by pressing art into the service of an oligarch’s vision of urban redevelopment. Titled “Fight for Beauty,” the exhibition claims to promote the arts in civic life, but serves essentially as an advertisement for Westbank, the powerful Vancouver property developer that mounted the show. In spite of withering reviews in the local press, Westbank extended the exhibition and launched a second blitz of self-promoting ads, underscoring in this way the belligerent thrust of the show’s central theme: “the fights that build cities and culture.”

The first exhibit in “Fight for Beauty” is a small color photograph by Fred Herzog, the well-known chronicler of Vancouver’s street life. Herzog’s modernist composition captures the stark symmetry of a dock’s buildings extending into the bay at sunrise, while the Marine Building’s ziggurat looms above, half obscured by haze. Herzog’s photos are typically bustling with activity; here, the image shows no human life. Empty as an Atget cityscape, the photo captures the scene of a crime. 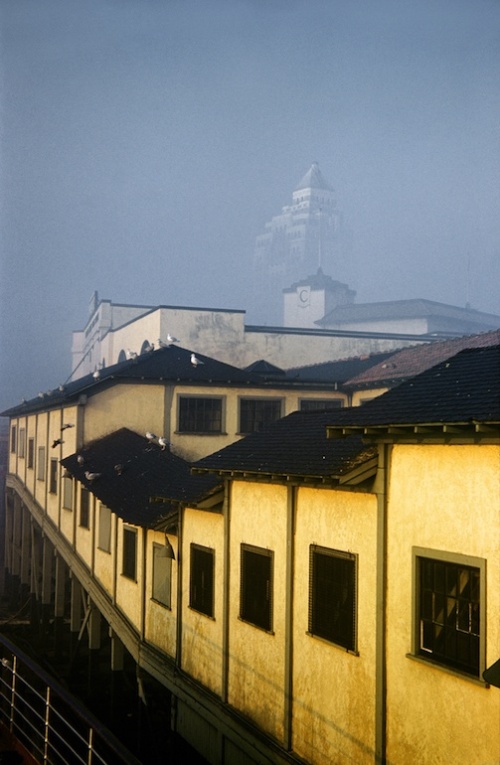 As narrated by Westbank’s founder, Ian Gillespie, Herzog’s photo portrays Vancouver’s Coal Harbor “before the very idea of the neighborhood had been formed.” The claim is peculiar, as it projects into the image a retroactive meaning, as if the developer’s as-yet unborn plans for Coal Harbor lay like a germ in the photo. Strangely, too, the developer’s “idea” of the neighborhood – an ultra-wealthy enclave with luxury hotels – erases the neighborhood’s prior existence, as if rebranding it could abolish the history that stubbornly clings to its name. For the developer, it seems, history presses forward like a force of nature, always benificent, turning coal into diamonds, and helpfully building interest on his investments. We learn from Gillespie that Herzog’s photo is from his own personal collection, and that it was shot on Herzog’s very first roll of film. This valuable rarity is perhaps the only thing the photograph shares with the rest of the exhibition.

Ballet; jewelry; couture fashion; a custom-made Fazioli grand piano: “beauty,” in Westbank’s curatorial vision, is unmistakeably construed as an accessory to wealth. Likewise, the developer’s contribution to urban design is a portfolio of ultra-luxury buildings, including the Shangri-La, “Where the living is easy,” a high-rise hotel and condominium tower planted amidst of a fresh crop of global luxury retail stores and across the street from Vancouver’s gleaming new Trump Tower.

Like these business ventures, Westbank’s notion of “beauty” has a strategic, rather than aesthetic function; it gives cover to class violence and dispossession by elevating the worthy intangibles of value over the mere vulgarity of price. In so doing, though, the company only reinforces its tacit identification with people for whom money is no object. Accordingly, the show’s brochure asks, “Since when have we learned the price of everything yet know the value of nothing?” – a question that somehow manages to be not only inane, but also wounded, plaintive and even vaguely threatening. For all that, however, the query is not entirely a non-sequitur, as it betrays the anger of threatened privilege stirred to righteous self-defense. And as an expression of defensiveness, the timing of “Fight for Beauty” seems no coincidence. The show, after all, was mounted at a time of vocal, organized, and occasionally successful protests against rising rents, displacements and evictions and after a slew of bad press prompted a tightening of regulations for Vancouver’s corruption-riddled real estate industry. “Fight for Beauty” also happens to close two days after the February 2 deadline for property owners to file Empty Home Tax declarations. Recent figures show that in a city with a less than 1% rental vacancy rate, as many as 1,000 houses are demolished every year, and upward of 25,000 homes in the city are currently empty or only temporarily occupied. 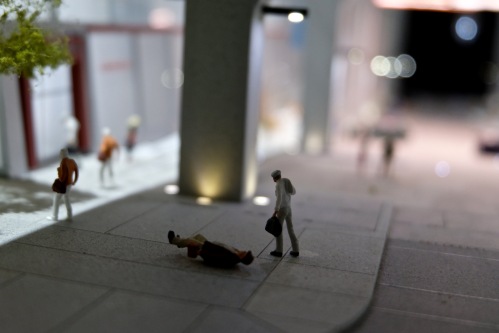 Westbank’s “Fight for Beauty” may tell us nothing about art, but it speaks volumes about the world-view of plutocrats who, in Chrystia Freeland’s description, see themselves as “the deserving winners of a tough, worldwide economic competition” and constitute “a transglobal community of peers who have more in common with one another than with their countrymen.”** The last point clarifies the yawning gap between Westbank and the local arts community, who countered the developer’s notion of civic beauty by pointing out that rising rents are displacing local working artists from the city. It also explains the tone of open contempt with which Gillespie refers to neighborhood anti-gentrification protests. Speaking, for instance, of development plans for the West End’s Lauren building, billed as “a luxury rental like no other in the neighborhood,” Gillespie heaps scorn on “the opposition,” a group of protesters he characterizes as “small, vocal, and sometimes violent,” underscoring the last word with a tone of lofty surprise and injury. 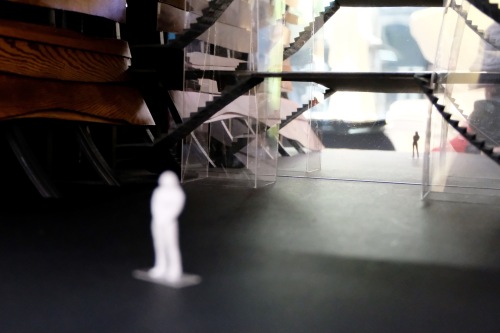 Gillespie counts as a significant victory in his “fight for beauty” the public sculpture commissioned for the Lauren, titled “Triumph of the Technocrat.” Constructed out of reclaimed materials, the sculpture is, in Gillespie’s account, a “self-reflective critique of its own development and process of creation” — from which we can glean that the artist put some thought into it. But it would be a mistake to dismiss the developer’s words as mere verbiage, as they disclose hidden meanings in his account of the sculpture’s broader significance to “the surrounding community,” as he puts it. For Gillespie, the sculpture represents “the unseen mechanical process of development and land speculation impacting the surrounding community, drawing parallels between the role and complicity of all players in the development process.”

An oligarch’s entire social theory is sketched out here. If, on the one hand, the developer concedes that land speculation impacts the surrounding community, with all that the word “impact” implies of a violent strike, on the other, he seems to fold that community — including, presumably, protesters and activists — back into the process of development itself as complicit players. There is, apparently, something more encompassing than the “surrounding” community, something that surrounds and contains them in turn. That thing, of course, is Vancouver itself, a city run by billionaire developers and fueled by unregulated foreign capital. To live in the city is therefore to be complicit with its unchecked, runaway development, whether you agree with it or not.

Surprisingly enough, the oligarch’s social theory of general complicity lends support to Walter Benjamin, who suggested that all who participate in the city of crime are “culprits.” The claim comes in the specific passage where Benjamin speaks of Atget.

It is no accident that Atget’s photographs have been likened to those of a crime scene. But isn’t every square inch of our cities a crime scene? Every passer-by a culprit? Isn’t it the task of the photographer … to reveal guilt and to point out the guilty in his pictures? (“Little History of Photography,” 527).

Benjamin and the developer are only superficially in agreement, of course, as the former intends to prod the conscience of guilty citizens and prompt them to assume their political responsibilities. Gillespie, in contrast, sees all citizens as already inevitably subsumed in an unstoppable force of development, each of them contributing, in their own small way, to the accumulated wealth at the top of Herzog’s distant misty pyramid in the sky.

Gillespie has brashly adopted the term Gesamtkunstwerk as his company’s building ethos, despite the term’s socially-conscious significance in the German Bauhaus. And yet the word is somewhat appropriate to Westbank if translated as “all-embracing art,” for as the developer’s social theory suggests, plutocratic architecture can encompass all of social reality. It may appear contradictory that this architectural totality results in the plutocrats’ increasing distance from us, like the orbiting residents of happy Elysium. But the purpose of Westbank’s Gesamkunstwerk is not, of course, to house everyone — far from it — but instead to include us all in the economic logic that promotes and rewards spiraling inequality.

Public art itself, in Gillespie’s mind, is therefore the materialization of an all-embracing “complicity” that absorbs rival parties within the ineluctable process of gentrification. This can be seen most clearly, perhaps, in his account of Stan Douglas’ famous photograph Abbott & Cordova, 7 August 1971. The monumental image, a major work of the Vancouver School, portrays the Gastown Riots, during which police brutally attacked and arrested protesting hippies. The composite photograph hangs in the atrium of Westbank’s Woodward’s building, at the very site of the riots themselves. 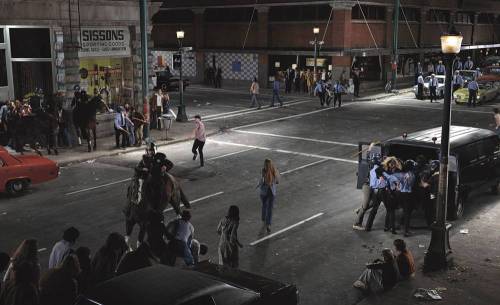 Completed in 2009, the Woodward’s building was and remains controversial for initiating gentrification in Gastown and the neighboring Downtown Eastside. For Gillespie, though, Stan Douglas’ photo signifies all of the history of the period, from 1971 to the present, indiscriminately. Speaking of the Woodward’s redevelopment project, Gillespie says that Abbott & Cordova “perfectly represents what this project has been all along: a fight in 1971, and a fight all the way to 2009.” Although he refers to the riots as “a pivotal moment,” that moment is construed not as belonging to its own time and context, and with its own political aims, but instead as simply “defining Gastown’s current character,” as if it led ineluctably to the gentrified present. Westbank’s version of Gesamtkunstwerk  performs here its remorselessly totalizing logic: embracing all, yet excluding most everyone, evicting them even from history. We should imagine Douglas’ photograph vacated, empty and desolate, as haunting as an image by Atget.

“Fight for Beauty” closes this weekend.

**Chrystia Freeland, Plutocrats: The Rise of the New Super Rich and the Fall of Everyone Else (London: Penguin, 2012), 5.