In 1506 a large sculpture lost since antiquity was found buried in a Roman vineyard. Word of the find spread fast, the Pope himself became involved, and a thirty-year-old Michelangelo was among those present at the excavation. The sculpture turned out to be none other than the famous Laocoön group, the dramatic portrayal of the Trojan priest and 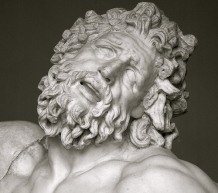 his sons in the throes of death, snared in the coils of sea serpents.

For Michelangelo the sculpture was a revelation. The Laocoön’s torturous Dionysian extravagance challenged the serene classicism of the sculptor’s early period and the influence of its figures can be seen his dynamic later works. His unfinished slaves, for instance, seem to writhe helplessly in a mineral substance as suffocating as the Laocoön’s serpents. Renaissance art had always been torn between pagan humanism and Christian pieties, but the Laocoön provoked a culture shock by bodying forth a virtually traumatizing scene of agony and unredeemed sacrifice.

When a five-ton boulder was excavated from a construction zone in Vancouver last month, it attracted comparatively little attention. No artist rushed to the site; no political figure or religious leader made a claim to the object. The boulder was merely set aside and marked off with reflector posts and caution tape. And yet there is cause to register an event of some magnitude, comparable even to the discovery of that ancient Roman artifact.

The Vancouver megalith is a glacial erratic that was quarried from the mountains by moving ice and deposited at its present location in Point Grey some 10 to 15,000 years ago by the retreat of the cordilleran ice sheet. Like the Laocoön, the boulder is a testament to another time, very different from our own, yet uncannily similar. At the start of the Neolithic period 10,000 years ago the planet’s warming climate spurred the swift development of agriculture, technology and cities. Comparing the Neolithic revolution to our time, Claude Lévi-Strauss argued that the former outstrips the present day for the sweeping extent of its technical and social transformations.* The anthropologist’s claim was meant to check modern humans’ self-regard and faith in progress. Pessimist though he was, Lévi-Strauss may have underestimated the relative ecological costs of the two periods. As neolithic humans spread across the warming globe they wiped out the great megafauna of the ice age. That impressive roster of extinctions pales, however, in comparison to the warming trend of our time, a trend of our own making; a just-released report from the WWF states that wildlife populations on Earth have declined by more than 50% in the forty years from 1970 to 2010. 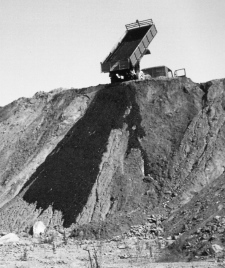 Who was paying attention to this impending calamity forty years ago? As it happens, Robert Smithson was in Vancouver in that benchmark year 1970. The artist had just begun creating his large-scale earthworks; in the first of these works he dumped a truckload of asphalt down a hillside of a quarry in Rome; three months later he poured the contents of a barrel of glue down a muddy slope in Vancouver’s Point Grey. Smithson’s trajectory is highly suggestive. To paraphrase the artist’s notorious quip about his New Jersey hometown, we might ask, “Has Vancouver replaced Rome as the Eternal City?”**

Smithson’s question is to be taken as a serious proposition. Moreover, our paraphrase accords with the artist’s evocation of the world’s cities “placed end to end in a straight line,” each mirroring the next in an “impossible progression” suggestive of “the limits of eternity.” Places like Vancouver’s muddy slope are meant to evoke an “eternity” quite unlike the timeless masterpieces dear to art history or the metaphysical paradises they portray, what Smithson calls “the incipient fascism of all dream worlds” (Writings, 269). Smithson’s entropic projects are not only a challenge to art history but to history itself; his vision of time telescopes into the prehistoric, geological past and an obsolescent posthuman future.

Each landscape, no matter how calm and lovely, conceals a substrata of disaster — a narrative that discloses “no story, no buoyancy, no plot” (Jean Cayrol: Lazare parmi nous). Deeper than the ruins of concentration camps, are worlds more frightening, worlds more meaningless. The hells of geology remain to be discovered. If art history is a nightmare, what is natural history? (Writings, 375)

Smithson’s long view of time put him somewhat at odds with ecological beliefs, and his plans for an “Island of Broken Glass” off Vancouver Island had to be scrapped in 1970 due to environmentalists’ objections. Smithson tended to see ecologists as idealists fixated on impossible edens; his own dialectical method eschewed sentimentality and anthropomorphism, viewing the landscape as always in flux and apprehended in a necessarily violent confrontation of mind and matter. This dynamic takes compelling form in the artist’s early Nonsites, which established a vital ecological correlation between the “here” of the consumer economy and the “there” of natural disruption. If such a dialectic seems to fit with “glocal” consciousness and eco-corporate commodity “sourcing,” its entropic perspective refuses to ally itself with any notion of a balance of forces or a détente in man’s war against nature.

In spite of this entropic vision, Smithson increasingly saw his work as a means to intervene concretely in issues of pollution and waste. His late works extended his process-based landscape interventions onto an enormous scale as he engaged with mining companies with proposals to mitigate pollution and landscape degradation through monumental earthworks. The artist unfortunately died before any of those projects could be completed. In a late unpublished fragment, typed entirely in upper-case letters (an urgent telegram from beyond the grave? A parody of grandiose Roman script?), the artist says that “Art can become a resource, that mediates between the ecologist and the industrialist” (Writings, 376). The fragmentary manifesto concludes with an evocation of prehistoric earthworks as evidence of “nature and necessity in consort.”

That “consort” still eludes us. In 2012 Michael Heizer installed a massive 340-ton megalith outside the LA County Museum of Art. Earth Art had never been such a public spectacle. The transport of the enormous boulder through the LA region entailed complex logistics and specialized equipment, and spectators gathered along the drought-stricken route as the boulder’s custom-built transporter slowly traveled its 100-mile journey from a quarry in the desert, burning prehistoric diesel fuel for a full 11 days. Heizer’s “Levitated Mass” is an ecological object-lesson, perhaps a monument “against the ages,” as Smithson once put it; it slams the door on an era of temperate climates that had opened with new human frontiers sown with glacial erratics.*** 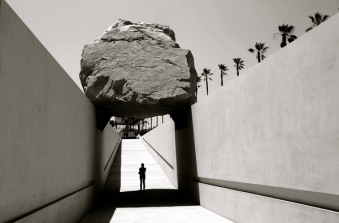